Bedbugs are small, oval, brownish insects that live on the blood of animals or humans. Adult bedbugs have flat bodies about the size of an apple seed. After feeding, however, their bodies swell and are a reddish color.

Bedbugs do not fly, but they can move quickly over floors, walls, and ceilings. Female bedbugs may lay hundreds of eggs, each of which is about the size of a speck of dust, over a lifetime.

Immature bedbugs, called nymphs, shed their skins five times before reaching maturity and require a meal of blood before each shedding. Under favorable conditions the bugs can develop fully in as little as a month and produce three or more generations per year.

Although they are a nuisance, they do not transmit diseases. 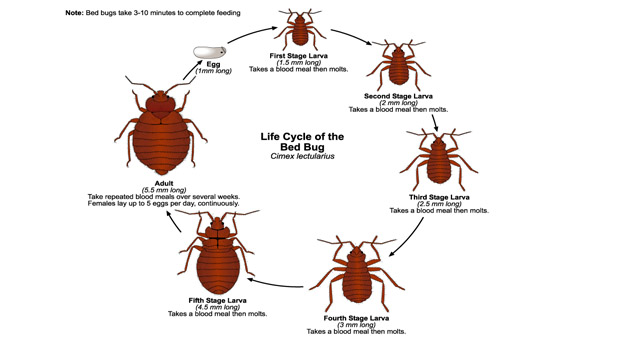 Bedbugs may enter your home undetected through luggage, clothing, used beds and couches, and other items. Their flattened bodies make it possible for them to fit into tiny spaces, about the width of a credit card. Bedbugs do not have nests like ants or bees, but tend to live in groups in hiding places. Their initial hiding places are typically in mattresses, box springs, bed frames, and headboards where they have easy access to people to bite in the night.

Over time, however, they may scatter through the bedroom, moving into any crevice or protected location. They may also spread to nearby rooms or apartments.

Because bedbugs live solely on blood, having them in your home is not a sign of dirtiness. You are as likely to find them in immaculate homes and hotel rooms as in filthy ones.

Bedbugs are active mainly at night and usually bite people while they are sleeping. They feed by piercing the skin and withdrawing blood through an elongated beak. The bugs feed from three to 10 minutes to become engorged and then crawl away unnoticed.

People who don't realize they have a bedbug infestation may attribute the itching and welts to other causes, such as mosquitoes. To confirm bedbug bites, you must find and identify the bugs themselves.